Effects of Agnihotra and Homa Therapy on Water Resources

We have been developing and managing a Homa farm in the Hunter Valley, NSW, Australia since 1994 up to the present time. We also regularly participate in voluntary work under the umbrella of Five Fold Path Mission taking Homa Organic Farming principles to farmers in Australia, New Zealand and Asia. The following are some key experiences we have had in relationship to improving the quality of water resources with Homa Therapy. As we are not scientists, we offer mostly anecdotal evidence i.e. our own and others direct experiences.

The Gift of Water

Perhaps the most direct demonstration of how Homa can balance nature and how nature in turn responds to the true needs of the people, who are helping her, is the story around our bore well.

When we purchased the land in 1994, it was in drought and the only source of water was harvested rainwater held in concrete tanks and dams. With ongoing drought we had to resort to recycling our water. One day a water diviner turned up and after thoroughly dowsing the land he told us there were no underground streams to speak of. However we took the decision to have a driller come to the land with the hope that we would hit underground water. To our great relief sub-artesian water was found at 40 meters (130 feet). It was tested on site and found to be saline and alkaline. The Ph was 9.5 and salinity measured at 1150 ppm.

So here was an opportunity to see what Homa Therapy could do and if it would possibly improve the water quality. We did Agnihotra by the bore and regularly placed Agnihotra ash down into the bore well. The state department of Water Resources of NSW was conducting regular tests on the bores in our neighborhood and they notified us of the salinity and alkalinity drop with each lab report until we had potable drinking water at a ph of 7.2, which is considered neutral and salinity measured at 720 ppm. Also what was noted is that the standing water level of the bore has never changed since its beginning at 16.5 meter throughout periods of drought and intense rain. The bore is not considered a high yield bore at 2000liter p/hr.

The story does not stop there however. Another Diviner, highly renowned for his ability to locate water and indicate its depth and flow rate, turned up at Om Shree Dham to learn about Homa Therapy. He was interested in divining the land. After walking the land he came to us saying that the underground water was acting in a very unusual way. He said it traveled along its natural course, then suddenly made a sharp 90 degrees turn, proceeded under the Fire hut where daily Agnihotra and other Yajnyas are performed and continued to the other side of the property then it turned back on itself and continued back to the original course along the other side of the property. We asked him to show us where it turned back on itself. He pointed to a shed. The water course turned back on itself just under our shed.! The diviner did not know that we had a bore nor was he aware that we had built that shed around it. So evidently the water course had made a beeline for the borehole, and then returned to its original course!

This seems to indicate that Homa has some mechanism that can redirect ground water to serve the needs of those that are performing these Homas. About the reduction in salinity and the change in ph from too alkaline to neutral ph- we have no explanation other than Homa brings about balance to nature. Shree Vasant states in an article written in Nov 2002: ‘If Homa is practiced on a large scale, the atmosphere is healed and the water resources get purified, leading to better absorption of sun’s rays’. I believe this is a clue as to how Homa brings water resources back into a healthy condition. Shree Vasant Paranjpe explains further:  ‘Water resources on earth are finding it difficult to absorb energy from the sun (due to pollution). This will result in depletion of marine life and imbalance in nature. Water pollution now takes its toll in rich as well as poorer countries. No water is relatively safe to drink now. HOMA Therapy and Agnihotra ash improve the quality of water and make it potable.’

Report indicates the de-polluting effect of Agnihotra ash on water. 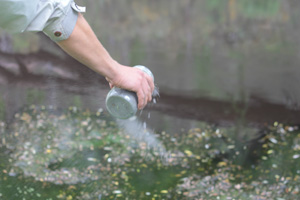 The raw effluent was collected from textile process industry. We invite scientists to investigate the why’s and how’s of Homa Therapy.

Effort is being made to understand Agnihotra through the language of science. In their bestseller book “Secrets of the Soil” June 89 USA, authors Peter Tompkins and Christopher Bird have described in detail the advantages and effects of Agnihotra on plants.

The authors propound physical explanation of the de-polluting effect of Agnihotra. According to them the colloidal molecules of cow ghee and cow manure could, through chelation, attract and grab pollutants in the air, the way water is purified by being flocculated. The seized molecules, as they settle on the ground would alkalize the soil and if they came in contact with a plant they would stick to leaves and act as a time release foliar nutrient which are taken in by micro stoma on the leaves. Besides scientific evidence, personal experience of lakhs of people from all walks of life all over the world indicates Homa’s effectiveness in the field of agriculture and health.

Some anecdotal reports in India Through Agnihotra and ash application salinity levels drop: In 2002 we were involved in outreach programs with farmers in the Maheshwar area, Madya Pradesh, India. One particular farmer told us his well from which he irrigated his crops had water with salinity problems. We told him of our experience and suggested that he regularly perform Agnihotra by the well and to regularly put Agnihotra ash into the well. A few months later we received a surprise visit from this particular farmer who happily informed us that he had done what we had recommended and had water samples laboratory tested once a month. With each successive test the water became less and less saline. In drought wells remain active and water retention in soil improved: Also in this period Homa Therapy volunteers were working with a Prestige owned Farm near Indore.

The workers on the farm were instructed to perform twice daily Agnihotra and some Om Tryambakam Homa as well as ash application in their irrigation well and in the soil. At this farm there was a Tryambakam hut and and an Agnihotra hut in lieu of a Resonance system. After approx 3 months of ongoing Homa at this farm we visited again. The area was in severe drought but to our surprise locals were lining up at the well. We asked what was happening and were informed that this was the only well in the area that had not dried up and indeed was supplying water for others without water. Frits at this point, out of curiosity, decided to dig a hole in the cultivating area on the farm to see how far he would have to go before hitting moisture. It was approximately ½ meter. He then went to a couple of neighboring farms and obtained permission to dig a hole in their cultivating areas and to our surprise we had to dig approx 1 meter before hitting moisture in the soil. This clearly demonstrated to us Shree Vasant’s statement that regular performance of Homa increases the soil’s ability to retain moisture.

Homa enables nature to function better even in drought conditions.

Karuna Coleman of Tamworth, NSW, Australia tells us that in 2005/06 the area in which their farm was situated was seriously effected by drought. Karuna had been performing Agnihotra consistently for several years at this place.

Though farmers in the surrounding area were losing stock at an alarming rate and the lack of water meant feed could not be grown, on Karuna’s farm they managed to grow oats for their stock and had a functioning vegetable garden for household purposes. They had minimal stock loss and the locals kept asking what they were doing as their farm still looked green and the cows looked healthy. In fact their farm assumed the atmosphere of an oasis in a drought ravished country. Further more, Karuna adds that unlike the locals all around who were in a state of fear, Karuna and her husband were never plagued by negative thoughts about the drought. It is the experience of people all over the world that daily Agnihotra is conducive to healthy positive states of mind. Anecdotal reports in Philippines, Australia , and India.

Many farmers practicing Homa around the world report a phenomenon of timely rain falling on their property alone. In the Philippines a farmer from Kabankalan, Negros Occidental last year reported that their Agnihotra-treated farm was thriving and that during a very dry summer all the farms around were very dry except for their farm where they received localized rains.

This phenomenon is also noted regularly by locals in regards to Tapovan. This has also happened on Mr Abhai Mutalik’s Homa farm in Karnataka and at on our Homa farm in NSW Australia I’d like to add here that the Hunter Valley where our Homa farm is located is known geographically as a drought prone area. Homa has been performed daily in this valley since 1987. Australia overall and in particular NSW has been severely effected by drought for at least a decade and yet the water reservoir for the Hunter Region has remained filled to good capacity while reservoirs through out the state have been at crisis point with the lowest levels ever recorded.

Finally I would like to mention that Vedic knowledge offers an overall explanation as to how and why Homa is effective in bringing nature back into a healthy state and maintaining it in that condition in the context of a polluted planet. Shree Vasant Paranjpe, our Homa Therapy teacher once said: “Ancient tradition of Vedic knowledge states that due to performance of Yajnya ‘APOORVA’ comes about. ‘Apoorva” means: ‘that which was not there before’. Some special effect comes about: ‘something that was not there before’. This means some special effect occurs due to Yajnya. The effect goes to the sub-atomic level. In Sanskrit, ‘Anu’ means ‘atom’. ‘Paramanu’ is the ‘sub-atom’. The subtle structure of atoms changes and comes back to as it was in nature”.

A polluted planet is in a denatured state, ie nature is thrown out of balance by pollution. This renders nature unable to perform properly and this is a very serious situation in relation to nature’s capacity to provide food. Already we are seeing food shortage on a planetary scale. Homa Organic farming needs to be implemented world wide to bring nature back into balance so that we have quality food for all and peaceful natural surroundings to enjoy quality of life.


Exact timing is required to perform Agnihotra. Request a Agnihotra timetable for your location.
Click here

Support the Homa Therapy Association of Australia with your donation. Thank you